Here is a brochure that provides an overview of the “Youth Voice” regional campaign! It includes the main achievements, country-level highlights, testimonials from young people and interviews with decision-makers.

Following the open call launched in October 2014, 80 organizations from 23 countries in Central and Eastern Europe and Central Asia signed up to join the campaign. 23,334 young people were involved in national consultations which resulted in national position papers development. The youth voice was then presented to nearly 500 decision makers (from local and national governments) across the participating countries, calling for the inclusion of youth priorities in the development plans and policies.

Read few testimonials from young people who were engaged in the campaign as well as some interviews with decision-makers they reached out to.

Special thanks to the campaign country-teams for their contribution and support for developing this publication! 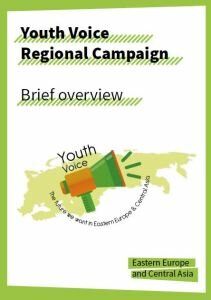