On behalf of the UNFPA-established Youth Advisory Panel, we are happy to announce the first activity and milestone of the phase II of the regional Youth Campaign “Youth Voice”, which was the development of the advocacy paper and its presentation to the decision-makers at the Youth National Forum on April 27, 2015 in Tbilisi. 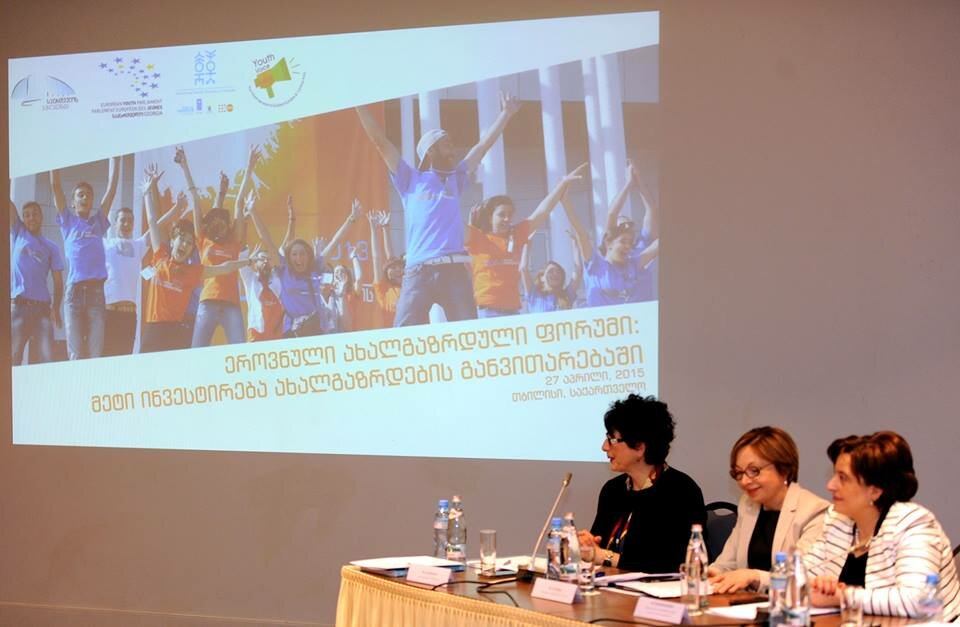 The goal of the Youth National Forum was to advocate for the increased investment in adolescents and youth development and the realization of their rights for ensuring sustainable development of the country. The forum was organized in cooperation with the Gender Equality Council under the Parliament of Georgia and in partnership with the European Youth Parliament—Georgia, as well as the initiative group of the United Nations Population Fund Regional Youth Advocacy Campaign “Youth Voice”. The forum provided a platform for dialogue among youth and the decision-makers to exchange opinions on youth-related issues and identify priorities, which affect their lives in Georgia.

Among the decision-makers were the Chair of Gender Equality Council of Parliament of Georgia, Deputy Minister of Education and Science, Deputy Minister of Sport and Youth Affairs, the Head of the Non-communicable Disease Department of the National Center for Disease Control and the Assistant Representative of UNFPA Georgia Country Office. Youth represents the key segment of the population, which is crucial for the development of the country and the future in general.

The World Youth Population Data Sheet 2013 of the Population Reference Bureau estimates youth aged 10-24 at 19% of the total population. In 2014 the United Nations Population Fund (UNFPA) conducted the Population Situational Analysis (PSA) of Georgia, which shed light on some of the major challenges for Georgian youth in the spheres of Education, Healthcare, Gender Equality and Employment. The research revealed that insufficient attention is paid to reproductive health of youth overall. Significant problems exist in the area of informing and educating young people about reproductive health and rights.

Ana Mosiashvili, representing the Georgian Youth Parliament in the Youth Advisory Panel, had an opportunity to share the Advocacy Paper with the attendees and address the main issues of Education, Health, Social Protection, Participation and Employment through youth perspective, delivering key messages to the decision-makers. The Advocacy Paper was developed based on the participatory approach of different youth groups, including youth who have left foster cares, LGBT representatives and etc.

Medea Khmelidze, Adviser on Youth SRHR Advocacy for Real People Real Vision presented the Youth Reproductive Health and Rights Situation Analyses in Georgia, which integrated the topics such as unhealthy behavioral trends among youth in Georgia, unresponsive job market, increased youth urbanization and etc. Youth representatives asked questions regarding the integration of SRH&RR in formal education curricula, on which they were responded that the Ministry of Science and Education is started to integrate the topics of healthy lifestyle, reproductive health and rights in different school subjects.

As the consequence of the conference, the outcome document “set of recommendations” was compiled, reflecting opinions provided during the forum, which will be distributed and shared with the participants in the nearest future.

* Originally posted in UNFPA Georgia “Youth Vision” Newsletter at http://www.georgiaunfpa.ge/en/media-center/unfpa-events/view/111 in May 2015