“Never before have there been so many young people. Never again is there likely to be such potential for economic and social progress. How we meet the needs and aspirations of young people will define our common future.”

With these words from Dr. Babatunde Osotimehin – UNFPA Executive Director, Y-PEER Macedonia opened the addressing and explained the importance of joining the regional campaign “Youth Voice”. The addressing was delivered at the Press Conference held in the Youth Cultural Center in Skopje, on the Observance of 1st of December-World AIDS day.

The Press Conference was organized by “Shadows and Clouds” (NGO using shadow theatre for SRHR education/member of Y-PEER Macedonia) to observe the World AIDS Day with announcement of a winner of a Condom Design Contest and to share info on the “EECA Youth Voice Campaign”. Media representatives and the young designers greeted the addressing with big rounds of applause and the event reflected the youth spirit and the power of youth creativity.

The day before the Conference, as one of the central events of the Macedonian “Youth Voice” campaign, Y-PEER gathered more than 300 people though invitations to the 3 performances of the Shadow theatre performances and the Exhibitions of the printed Youth messages for the future development agenda. 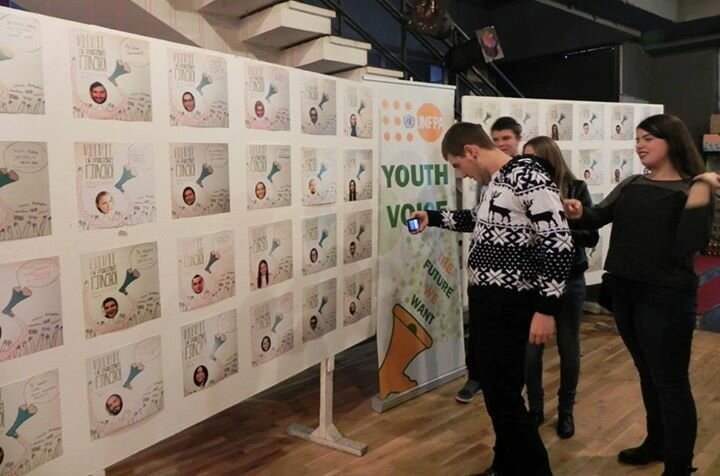 Y-PEER Macedonia team states that “The day before the press conference was a “day reserved for civically engaged art and culture”. The daily event had a concept of blending entertainment and education with active talks about the burning issues of young people. We are very happy that on a rainy Sunday we managed to see great number of young people circulating around the place, discussing SRHR topics but also sharing their views on many important youth topics and current issues”.

In addition, as only a campaign can join organizations, the Macedonian Youth Voice campaign was supported by many organizations which gave additional credibility to the concept of diversity and channeling of different youth voices. At the event 5 youngsters from the platform “LicevLice” were selling their copies of their socially-engaged magazine. These young people are part of an independent media-Street paper named “Licevlice” that promotes the social entrepreneurship concept in Macedonia and targets marginalized groups. Namely, the vendors come from marginalized groups (Roma community, homeless people) and with the sale of the magazine they are earning income: half of the money goes for the organization, half of the money goes for the vendor. The 5 teenagers vendors from “Licevlice” that visited the event, watched the theatre performances and also left messages on the Face in Hole board. Armando, who comes from a Roma community, was very loud and clear and he wrote so everybody can see “ For me, its most important to go to school”.

The Shadow Theatre performance “Stories from the Hallway” was delivered by Shadows and Clouds and young people taking part in their project(MTV SAF supported), and it was facilitated by Y-PEER Macedonia FPs: Irina Janevska and Ivica Cekovski. The audience reacted very positively to the creative tool, and also young people participated in all of the follow up discussions on SRHR topics.

The Phase 3 is the last phase of the implementation of “Youth Voice” in Macedonia, and it will result with Youth Roundtable Discussion where youth representatives will have the chance to discuss youth-related issues and draft their recommendations that will be further used for youth advocacy actions taken by Y-PEER Macedonia.